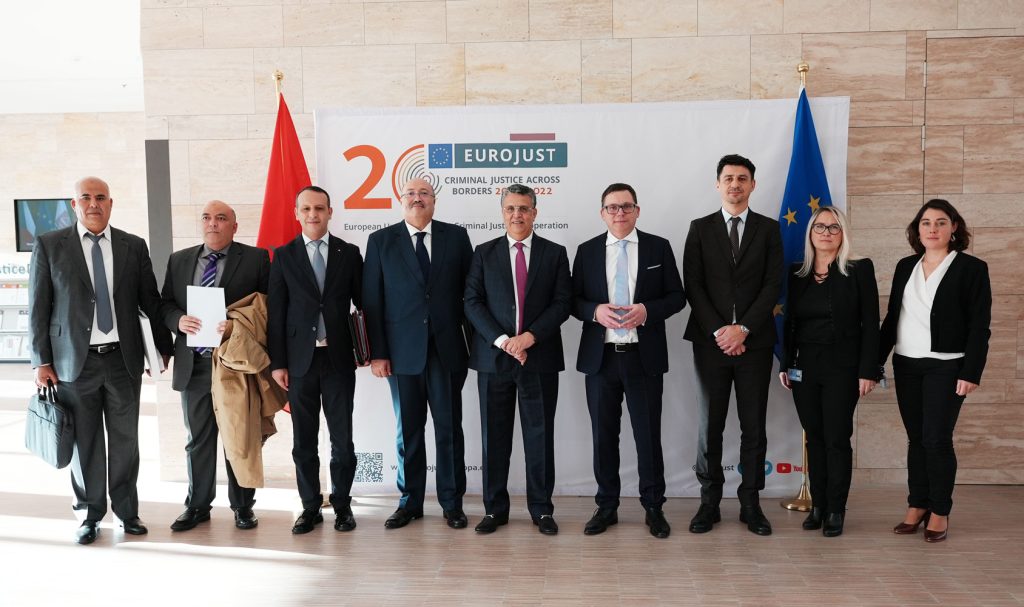 On Thursday 24th of November, Eurojust and the EuroMed Justice Programme team had the honour to welcome H.E. Mr Abdellatif Ouahbi, Minister of Justice of Morocco, accompanied by H.E. Mr Basri Ambassador of Morocco in The Netherlands and Mr Hicham Mellati, Director of Criminal Affairs and Pardons at the Moroccan Ministry of Justice.

Mr Ladislav Hamran, President of Eurojust, received the delegation together with the Head of Eurojust International Affairs Office and two representatives of the EuroMed Justice programme.

Mr Ouahbi briefed the participants on the current work of Morocco on amending several laws and the code of international cooperation in criminal matters in order to adapt to the international standards and tackle crime more effectively. Several questions were raised, among them the necessity to respect human rights, as in the protection of prisoners and the right to a fair trial. Those topics show to be of high importance for Mr Ouahbi, who relies on his new position of President of the Council of Arab Ministers of Justice to embark his colleagues of the Arab region in his fight against crime in full respect of human rights.

Both parts showed enthusiasm to a closer cooperation between the agency and the Kingdom of Morocco. Since the beginning of this new phase, Morocco has been very active in the EMJ programme, with a high level of representation  in all meetings, the most recent one being the EuroMed Forum of Prosecutors General in October 2022. In addition, several practitioners are already registered in the recently created EMJ Network of contact points (EMJNet), composed of practitioners who can assist with international judicial cooperation in criminal matters requests to strengthen the contacts and the operational cooperation between criminal justice authorities from SPCs and EU MSs.

While H.E Minister Ouahbi underlined the importance of training to align with the international standards, the representative of EMJ took this opportunity to thank Morocco for hosting a training organised in June 2022 in Marrakesh by the EuroMed Justice Programme training provider Safe / EPLO.