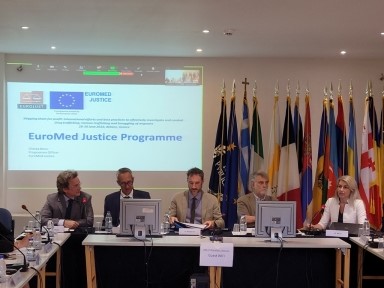 On June 28-30, 2022, at its premises in Athens, the EPLO conducted a training session on “International Efforts and Best Practices to Effectively Investigate and Combat Drug Trafficking, Human Trafficking and Smuggling of Migrants” for judges and prosecutors from countries of the South Mediterranean, in the framework of the EuroMed Justice programme.

The training was attended by 18 judges and prosecutors coming from seven south partner countries of the EMJ programme: Algeria, Egypt, Israel, Jordan, Lebanon, Libya and Palestine*.

The session was specifically aimed at improving judicial cooperation between EU Member States and South Partner Countries in the fields of drug trafficking, human trafficking and smuggling of migrants.

With the support of international experts, the practitioners discussed trends and issues in the trafficking of narcotics, human beings and smuggling of migrants, which have become increasingly important in the Mediterranean region in recent years. The participants addressed mutual legal assistance, special investigative techniques, extradition and other forms of judicial cooperation to effectively combat these cross-border crimes.

The EPLO and Fondazione SAFE are implementing the training component of the EuroMed Justice (EMJ) programme, which involves the organization of 21 training sessions for over 450 judges and prosecutors.

*This designation shall not be construed as recognition of a State of Palestine and is without prejudice to the individual positions of the Member States on this issue.